AACS, the decryption licensing outfit founded by a group of movie studios and technology partners including Warner Bros, Disney, Microsoft and Intel, has launched a crackdown on DRM-circumvention software.

Under U.S. law it’s forbidden to distribute software with the primary intention of circumventing copyright protection. In its complaint, AACS accuses the “DVDFab Group” of violating the DMCA’s anti-circumvention clause by selling tools that can bypass their DVD encryption.

“The DVDFab Group openly touts these illegal circumvention attributes of the DVDFab Software on the DVDFab Websites, advertising that, among other things, its software products ‘remove all Blu-ray copy protections,’ and ‘can remove … all known AACS copy protections’,” AACS writes in its complaint.

To stop the Chinese-based DVDFab from distributing its software in public, AACS moved for a preliminary injunction. After DVDFab failed to respond in court the request was granted by New York Federal Judge Vernon Broderick. TF has obtained a copy of the order.

At the time of writing none of the above domains can be reached.

Besides the domain names, DVDFab’s hosting providers are also ordered to stop servicing the company, as are other online services including Facebook, Twitter and Google+. Whether AACS has asked for the closure of DVDFab’s social media accounts is unclear, as they remain active for now. 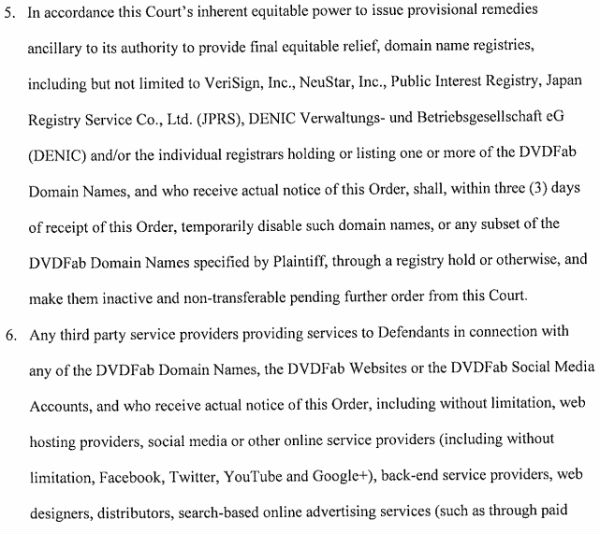 In summary, the order grants AACS the power to completely wipe all traces of DVDFab from the Internet, and make it hard for the company to resurface elsewhere. At least, that was the plan.

The Chinese software vendor is not giving up easily, and is already making a comeback.

“Existing bookmarks for either site may not work from some locations, so temporary sites for both are being prepared and will be online shortly,” a company spokesman says, pointing users to dvdfab.jp.

Quite how long this domain and associated payment services can remain functional remains to be seen.

In any case, AACS and the movie industry will be encouraged by this broad injunction, and it wouldn’t be a big surprise if we see this strategy being repeated against other piracy-related targets in the near future.