Andrus Ansip, the European Commission’s Vice-President for the Digital Single Market, has admitted that EU copyright law is “pushing people to steal,” because they seek out illegal copies of works that are not available to them legally because of the widespread use of geoblocking in Europe.

Ansip was interviewed as part of the music industry’s annual Midem event (available as a video, found via TorrentFreak). He pointed to Spotify as an example of how people could be encouraged to pay for copyright material: “if somebody is able to provide services with better quality, with higher speed, people prefer to act as honest people; they are ready to pay, they don’t want to steal.”

A well-prepared Ansip reeled off a range of interesting statistics in the interview. He said that “20% of Internet users in the European Union are using a VPN to get access to digital content,” and gave two examples of countries that had successfully converted those resorting to unauthorised sources to paying customers. “In Norway some years ago, 80% said they are using so-called ‘free’ downloads,” he explained. “But today, just 4% of Norwegian people say they are using free downloads.”

He also emphasized that legal services need to be offered first before strengthening copyright enforcement, which is what happened in Norway. “At first, they gave legal access to digital content to people, then of course they were able to pay more attention to piracy on a ‘follow the money’ principle.” 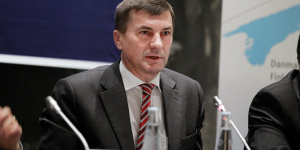 In other words, the authorities sought to tackle the companies who run the sites that profit from unauthorised content, rather than pursuing individuals who used those services. That doesn’t work, Ansip points out, because surveys show that “68% of film viewers [in the EU] said they are using free downloads,” and “to put 68% of people in jail is not really a good idea.” He said that was why copyright reforms, of the kind proposed by the European Commission in its Digital Single Market strategy, “are really needed.”

One thorny issue for the Digital Single Market strategy concerns territoriality—the carving up of the EU into small, local sectors, which goes against the idea of a single, unified European market. Ansip emphasized: “I’m not against territoriality, I’m against absolute territorial exclusivity. We have to allow portability of the content. There are 100 million Europeans sitting at home who would like to get access to digital content in some other EU member states but they cannot, because of geo-blocking.”

This seems to confirm that the European Commission does not intend to force distributors to offer a single licence for the whole of Europe, but will require that Europeans can access material they have paid for, wherever they are in the EU, without encountering geo-blocking.

By Elizabeth Thompson CBC Politics A key section of Canada's elections law designed to curb misinformation during elections has been struck down and declared unconstitutional. In a 15-page decision, Ontario Superior Court Justice Breese Davies ruled that the section is an unjustifiable restriction on Canadians' right to free speech. While the federal government had asked the court to suspend the ruling for 12 months, Davies ruled that it takes effect immediately. "I recognize that if I decline to suspend the declaration of invalidity, there is a risk that a federal election might be called before Parliament can enact a replacement to s. 91 of the CEA (Canada Election Act), should it wish to do so," Davies wrote in the judgment dated Feb. 19.